Location: A busier, multi-lane road. When beginning, choose a time with limited traffic, such as a weekend morning. 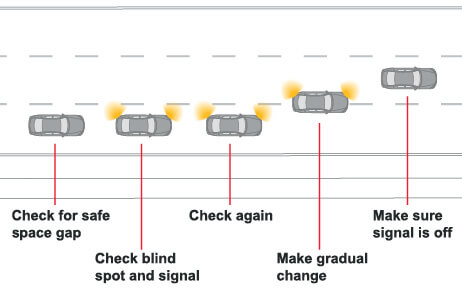 Have your teen practice these lane change steps until proficient:

Motorcyclists, bicyclists, and pedestrians are more difficult to see than cars because they are smaller — and drivers tend to focus on looking only for cars. Traffic, weather, and road conditions require cyclists to react differently than motorists. It can be difficult for young drivers to judge and predict their actions. Always give motorcyclists and bicyclists a wide berth and reduce your speed.

Start with right turns, which are fairly simple. Right turns are always made from the right lane of the current road to the first, open lane of the new road. Look for signs and signals that indicate whether “right on red” is allowed. Practice right turns until you feel confident that your teen is proficient.

There are three types of left turns:

Protected left turns should be made from the designated lane only when the left turn signal displays
a green arrow.

For unprotected left turns, coach your teen on these steps:

Left turns are one of the hardest maneuvers for teens to master. Be patient. New drivers often have difficulty judging the speed and distances of multiple lanes of oncoming traffic. Practice judging oncoming vehicles’ distance from your vehicle by counting out loud the time it takes for them to reach your car from a designated point.