Refer to Skills One and Two. Clearly seeing the adjacent traffic is especially important on multi-lane roads. Remind your teen to check the mirror positions when entering the car, and to constantly monitor the traffic around them.

Refer to Skill Six. Remind your teen that when stopping their vehicle behind another one, they should be far enough back to see where the other car’s tires meet the road.

Refer to Skill Six. Review the three-second rule with your teen, emphasizing that increasing following distance is the single best way to reduce crash risk. This gives the driver visibility, time, and space to avoid crashes. 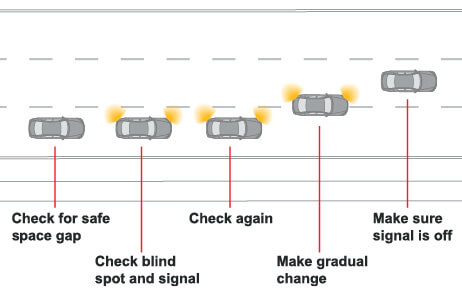 Ask your teen to list valid reasons to change lanes. Good answers include: to make a turn, to avoid an obstacle, to exit the road, to park, or to pass another vehicle. Let them know about Iowa’s “Move Over” law, which requires drivers to slow down and change lanes to move around emergency vehicles or any parked or disabled vehicle with flashing lights.

Motorcyclists, bicyclists, and pedestrians are more difficult to see than cars because they are smaller – and drivers tend to focus on looking for cars. Traffic, weather, and road conditions require cyclists to react differently than motorists. It can be difficult for young drivers to judge and predict their actions. Always give motorcyclists and bicyclists a wide berth and reduce your speed.

Left turns are one of the hardest maneuvers for teens to master. Be patient. New drivers often have difficulty judging the speed and distances of multiple lanes of oncoming traffic. Practice judging oncoming vehicles’ distance from your vehicle by counting out loud the time it takes for them to reach your car from a designated point.