How To Pass On A Two-Lane Road

Passing is prohibited on two-lane roads:

Passing is Permitted When:

Passing On The Right

You may pass on the right of another vehicle which is making or about to make a left turn if there is sufficient pavement width for both your vehicle and the vehicle making the left turn. You may also pass on the right when traveling on a multi-lane highway carrying two or more lanes of traffic in the same direction.

When Someone Passes You

When a driver behind you is overtaking your vehicle, be alert for any unsafe actions by the other driver. It is considered courteous to reduce your speed slightly, making it easier for the other vehicle to pass you. It is unlawful to increase your speed before you have been passed completely by the overtaking vehicle. 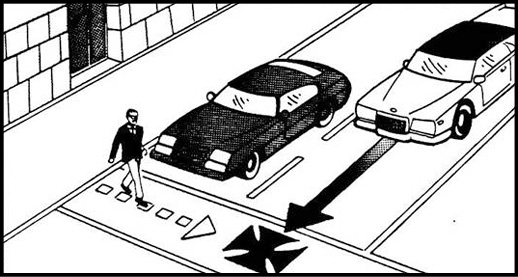 Whenever any vehicle is stopped to permit a pedestrian to cross the roadway at a marked crosswalk or at any unmarked crosswalk at an intersection, the driver of any other vehicle approaching from the rear shall not overtake and pass the stopped vehicle. When stopping to allow a pedestrian to cross in front of you, leave sufficient room between your vehicle and the crosswalk so that approaching traffic can see the entirety of the crosswalk.

Slow down and prepare to stop if you are approaching an intersection where other vehicles are stopped, even though the traffic control devices indicate they are authorized to proceed. If they are stopped because they are allowing a pedestrian to cross the roadway, their vehicle may block your view of the pedestrian.

Bicyclists have the same rights and responsibilities on the road as motorists. Bicyclists are permitted to travel in the center of the traffic lane if there are safety hazards on the right side of the road (such as parked cars or debris) or if the lane is too narrow for a bicycle and a vehicle to share. Pass bicyclists with caution, treating them as you would any other vehicle and according to Georgia law. The law requires a driver to allow at least three feet between the driver and bicyclist when passing. If it is not safe to leave three feet of space, the driver should wait until it is safe to pass the bicyclist. Bicycle lanes are not passing lanes and should never be used to pass another motor vehicle.

A motorcyclist legally occupies the full width of a single lane when traveling. When passing a motorcyclist, a driver must pass in an adjacent lane. Drivers are not permitted to occupy the same lane as a motorcyclist while passing them.

It is unlawful to weave from one lane of traffic to another in order to move faster than the flow of traffic. A motorist may change lanes on a multi-lane highway and pass slower moving vehicles only when it is safe to do so. A driver’s signaling to change lanes should be clearly indicated so as to warn vehicles of the movement.

Turn movements by motor vehicles are regulated by law, and failure to observe or comply is a violation. Drivers must know and under­stand the law in order to turn safely and avoid crashes.

A turn signal must be given whenever a turn is made to the right or the left. You must give a continuous turn signal for an adequate distance to alert other drivers before turning. Never decide to make a turn at the “last minute.” Turning quickly or erratically can be dangerous to you and other drivers.

It is against the law to flash turn signals as a courtesy or “do pass” signal to other drivers in the rear.

How To Make A Right Turn

How To Make A Left Turn

Watching for Pedestrians When Making Turns

At most intersections where there is a pedestrian signal, the “Walk” signal of the crossing street corresponds to the green light of the roadway you are traveling on. This means that when you are authorized to turn, pedestrians are authorized to cross the street onto which you are turning at the same time. Therefore, before making your turn, you must stop and remain stopped for any pedestrians in the crosswalk of the road onto which you wish to turn until they have cleared the lanes of traffic upon which you are traveling.

On a multi-lane, two-way highway, you must never drive to the left of the center line except when making a left turn. If traffic control signals or signs are present, you may only complete the turn when authorized to do so by the traffic control signals or signs. When making left turns, you must always yield to oncoming traffic, and wait for pedestrians to clear the lanes of traffic, driveway, sidewalk, or alley you are turning into.

It is against the law to park on a highway. If the vehicle is disabled, you should make every practical effort to park off the highway, leaving free passage and a clear view of your vehicle for 200 feet in each direction.

Stopping, Standing or Parking is not permitted under the following conditions at any time:

Stopping, Standing or Parking is permitted only momentarily to pick up or drop off passengers under the following conditions: