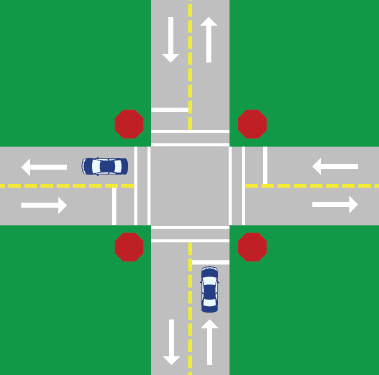 Stop lines are white lines painted across the pavement at intersections indicating the point beyond which your vehicle should not cross if you are stopping for a traffic control device. In urban areas, the line is usually located about four feet before the crosswalk. Drivers must come to a complete stop at the stop line, when present, not at the actual stop sign or traffic signal.

These white lines are painted across, or partially across the pavement. Sometimes they will be painted in a ladder pattern. When pedestrians are in the crosswalks, they have the right-of-way over motor vehicles. Crosswalks are sometimes in the middle of a block in residential areas, and in some cases, a pedestrian crossing signal is located at the white line. 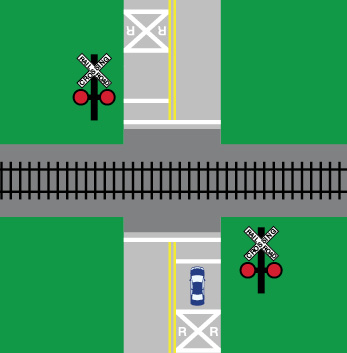 When a road is crossed by a railroad crossing, the pavement is usually marked with a large X and two R’s. At railroad crossings, a yellow line is always placed on the right side of the center line to prevent passing. The crossing is sometimes equipped with control arms and/or emergency lights, to warn drivers of approaching trains. The driver of the vehicle must stop if warning signals indicate a train is approaching. 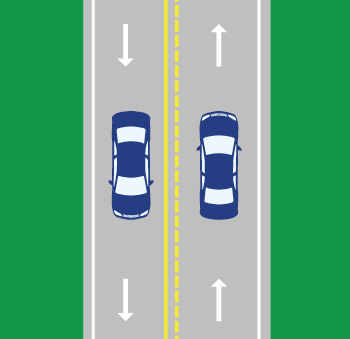 These are used to separate traffic moving in opposite directions on paved roadways. Broken yellow lines are used when there are only two lanes and it is safe to pass in either direction.

These single, solid yellow lines on two-lane roads indicate zones where passing is prohibited. They will be located on the right of the broken yellow line when they apply to the lane in which you are traveling. In some instances, both yellow lines will be solid, indicating it is not safe for passing in either direction. 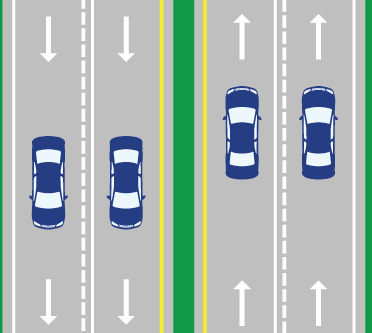 These are the solid white lines along the side of the pavement. They serve as safety guides, especially at night when it is difficult to see the edge of the road. A yellow edge line may be used on the left side to warn of narrow or raised medians.

These are the white dashes that mark the individual lanes of travel on streets and highways having more than one lane for traffic moving in the same direction.

When there are four or more lanes with traffic moving in opposite directions, two solid yellow lines mark the center of the roadway. You may cross these lines only to make a left turn into or from an alley, private road, driveway, or another street. When traveling on a multi-lane road, stay in the right lane except to pass other vehicles traveling in the same direction.

These markings, created by diagonal yellow lines, are on streets and highways indicating that the road is narrowing or there is an obstruction on the roadway. The area is similar to a triangle with solid yellow diagonal lines within the outside lines. Always keep to the right of these markings.

These lanes, bordered by solid yellow and/or broken yellow lines, is in the center of many streets and highways to make left turns. A motorist desiring to turn left should proceed to the turn lane just prior to making a left turn. Georgia law prohibits the use of this lane for any purpose other than making a left turn. You may enter this lane no more than 300 feet from the location of the left turn.

These are solid white lines typically located between the farthest right traffic lane and the curb or edge of the roadway. If there is a right-turn-only lane present, the bicycle lane will be located to the left of the right-turn-only lane in order to safely accommodate bicycles traveling straight through the intersection. Bicycle lanes may also be marked with painted symbols of a bicycle. Drivers of motor vehicles are prohibited from driving or parking in the bicycle lane, except to cross over it to make a turn. When crossing over a bicycle lane to make a turn, motorists must yield to bicyclists that are present. 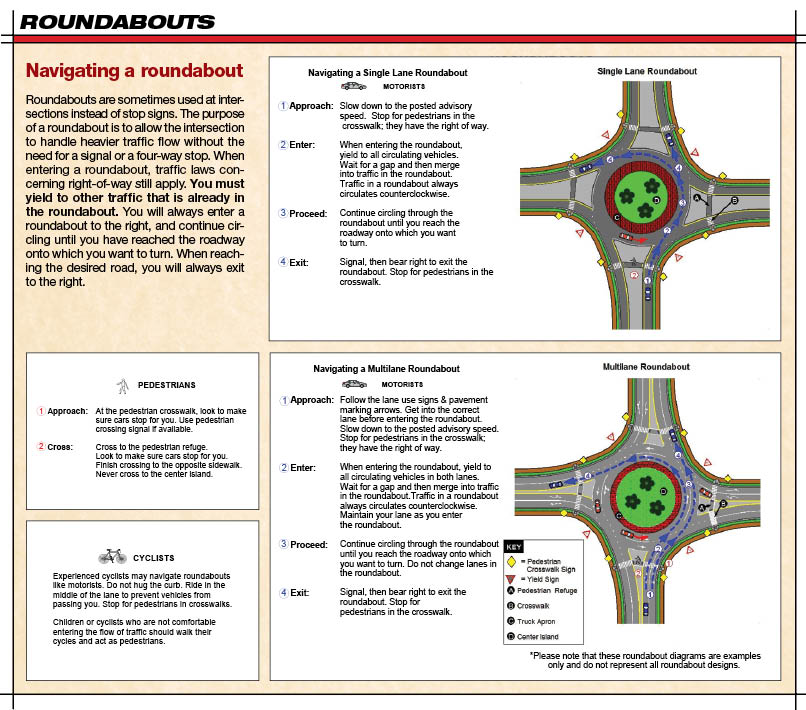